2020: The Portuguese year for racing competitions

The next event within the framework of Moto GP, and the last of this year, is the Portuguese Grand Prix that takes place at the Algarve Internacional Racetrack - also known as Portimão Circuit - on the weekend of November 20-22.

Miguel Oliveira and a Moto GP Grand Prix without an audience

The Portuguese Formula 1 Grand Prix took place at the end of October and attracted a huge tens-of-thousands crowd to Algarve. This November, the Moto GP Grand Prix, also taking place at the Portimão Circuit, will have no public, given the scope of the public health measures put in place by the Portuguese authorities to fight the pandemic.

Miguel Oliveira, the Portuguese athlete that his fellow countrymen have seen won several sports distinctions lately, said he felt sorry for not having fans in Portimão, while still recognizing that the restrictions in place are understandable and that it is necessary to maintain a positive attitude to compete in his homeland.

The Portuguese rider finished the Moto GP European Grand Prix in 5th place, at the Ricardo Tormo circuit, in Valencia, Spain, on November 8. The Almada pilot for Tech3, with his KTM, began the race on the third row of the starting grid (8th place).

Who is Miguel Oliveira?

Miguel Ângelo Falcão de Oliveira was born on January 4, 1995, in the parish of Pragal, in Almada, and is the first Portuguese pilot to compete full time in the World Championship and to get to podiums and Grand Prix victories. Finally, last year, he ascended to the top of the two-wheels competitions: the Moto GP.

His father, Paulo Oliveira, a former driver of the National Speed Championship, had always supported his son's appetite for racing and gave him his first quad bike when he was four.

Miguel started racing in the National Championship at age nine, supported by entities such as the FMP (Motorcycling Federation of Portugal) and the Motor Clube do Estoril. He went on to the Portuguese Mini GP Championship in 2004, winning the Revelation of the Year award from the Portuguese Sports Confederation that same year.

The athlete never stopped: 2011 was Oliveira's first season in the Grand Prix, in the 125 cm3 category, with the Andalusia-Cajasol team. Fast forward to 2015: Oliveira finished his season with a KTM in the Ajo Motorsport team with six victories, three 2nd places and one pole position. In 2016, he got onto the Moto2 category, joining the Leopard Racing team, along with the Moto 3 champion Danny Kent. That season was marked by some adversities, namely a fractured collarbone, which forced him to miss four Grand Prix.

In 2017, he was invited to join the KTM Red Bull Ajo team again, having finished the World Championship in 3rd place, just 2 points from the 2nd place. At the beginning of 2018, he was elected Sportsman of the Year, in the Male Athlete category, by the Portuguese Sports Confederation, as well as being named Global Ambassador for Integrity and Transparency in Sport by the Sports Integrity Global Alliance (SIGA). After one more year filled with victories and points, he signed the contract that took him to Moto GP, the highest echelon of world motorcycling, becoming the first Portuguese to reach that level of the sport. 2019 was a season of growth for the athlete, his best result being the eighth place at the Austrian Red Bull Ring circuit. He had conquered 33 points when he finished his season prematurely after an injury suffered at Silverstone.

Other projects: education for sports

Supported by his media visibility, Miguel Oliveira founded a pioneering educational project in Portugal: the Oliveira Cup and his School of Motorcycling, aiming at finding his "successor" amidst young people aged 10 to 14. Besides promoting the kids sports careers, Oliveira sees that they stick to school and get good scores! Oliveira also has a leading role in the preparation of young talents from the Oliveira Cup. They start at the National Speed Championship, under the seal of the Miguel Oliveira Fan Club Racing Team.

At the same time, and thinking about his future after the racing has stopped, he continues his studies: Oliveira attends the integrated Masters in dental medicine, setting himself as an example of determination for all the young people who follow his career.

It's not by chance that this type of event takes place in the Algarve. In addition to the top conditions of the Portimão circuit, the Algarve is considered the best European beach destination (at the recent World Travel Awards) and also an excellent tourist destination for sports and leisure, to which its ideal climate decisively contributes, with a residual number of rainy and cold days per year. The whole region is at the service of tourism at the highest level, with excellent hotel infrastructures, a command of foreign languages, best in the world hospitality, exceptional cuisine and stunning sea and even mountainous landscapes. All of these aspects come together in an irresistible invitation to discovery.

Portuguese and foreign tourists increasingly look at the Algarve either to practise sports or to watch sporting events. The Algarve is ideal for golf, water sports (surfing, sailing, windsurfing, bodyboarding or kayak), tennis, football, athletics, horseback riding, motor racing, motorcycling and cycling. The clear waters and reefs, both natural and artificial, also provide the right conditions for sports like fishing and diving.

The Moto GP Grand Prix at the Algarve, on November 22, is an exciting opportunity to head to southern Portugal, Algarve, on November 22. Don't miss this chance to plan your next trip to this region that has a lot to offer. No one can escape the charm of the best beach destination in Europe, in one of the most peaceful countries in the world, standing out for its offering of sporting challenges and leisure for all tastes! 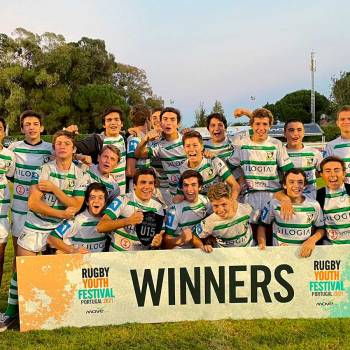