An atypical Super Bowl crowned the Buccaneers and Tom Brady

The Tampa Bay Buccaneers won the Super Bowl for the second time (after winning in 2003) in the early hours of February 8 by defeating the Kansas City Chiefs, the then defending champions of the American Football league (NFL), by expressive 31-9.

In the most anticipated match of the year and one of America's most important, most expensive, and hottest sporting events, Tom Brady was the hero of the night, winning his 7th title and achieving the status of best NFL player in history. The Buccaneers completely dominated the match and at half-time, they were already winning by 21-6.

Tom Brady is now nicknamed Goat (the Greatest Of All Time) in American Football and has joined the sport's Olympus. The athlete collected seven Vicent Lombardi trophies, one more than the two most titled teams in the NFL: the Patriots (the team he represented for two decades and in which he won six titles) and the Pittsburgh Steelers. The win in the 55th edition of the Super Bowl, against last season's champion, the Kansas Chiefs, led by Patrick Mahomes, was the icing on the cake, all in an unusual year.

At 43, the athlete displays rare longevity when it comes to titles, that were spread evenly throughout his long career, adding up to three between the ages of 24 and 27 years old and four from 37 to the current 43 years. Tom Brady, who changed teams in the 2020 season, travelling from Massachusetts to Florida, is the first pitcher to ever get the most anticipated title in a second team in the first season.

In front of a television audience of 100 million Americans, the player, also known for his marriage to another public figure, the Brazilian supermodel, Gisele Bündchen, was also considered the MVP (Most Valuable Player) for the fifth time.

After the match, the reputed New York Times remembered that it's only natural that Tom Brady, a ten Super Bowls veteran, might be preparing his retirement. He stated publicly that he wanted to play against the younger generation of defenders. That time has come.

A different edition and the show around it

For the first time in the competition's history, the Buccaneers played the decisive match at their own Raymond James Stadium, in Tampa. With a capacity for 65 890 people, it recorded the worst assistance ever to a Super Bowl due to health safety issues as a result of the COVID-19 pandemic. Only 22 000 supporters were able to attend, 7 500 of which were health professionals fighting the virus, who were offered tickets directly. To replace the tens of thousands of fans that generally fill the stadium, the fans' cardboard images were placed in the empty half-chairs.

Every Super Bowl edition is a worldwide attraction, and this year's event was no exception.

As tradition dictates, the is always a halftime show. This year, the stage was given to The Weekend. 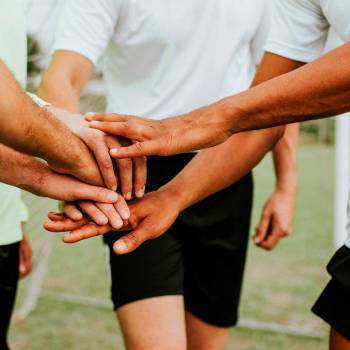 Why is sports a company's best practice?
Move Sports