Three months into 2021: ongoing pandemic, mass testing, and the return to sports

If 2020 was an unprecedented year for the world in general, and for sport in particular, 2021 is no less challenging: in-between states of emergency in several countries, testing and vaccination of athletes, mass public testing, and pilot tests of sports events with an audience, sports is coming back, step by step.

Top teams and professional sports, with rigorous testing regimes for COVID-19, continue, albeit without a live audience. Amateur and youth training and competition remain impaired.

It remains to be seen what 2021 will still be able to give to the sporting world, knowing that, despite all troubles, sports is by nature a force of resilience. In Portugal, major sporting events will continue to be held without a live audience at least until mid-May, when the situation will be reassessed depending on the evolution of the pandemic.

Despite the ongoing health crisis scenario, and with vaccination plans suffering delays in Europe, the Portuguese government is opening up to the possibility of carrying out pilot tests for the return of spectators to cultural events. Meanwhile, in the United Kingdom, the government is moving forward, starting this month, with COVID-19 "passports" in cinemas, theatres, and sporting events. These "passports" tests will start this month and continue until mid-May, involving events such as the Football Association Cup semi-final, which will occur in Sheffield.

The show must go on: great competitions in 2021

Despite all limitations, sports continue to entertain us. Here's a look back at some of the great sporting events that took place in 2021 already.

The 2021 Open was held in Melbourne, Australia, between 8 and 21 February. Novak Djokovic repeated his usual performance at the tournament and won his 9th trophy in Australia in a less than two hours-long final. This is Djokovic's 18th Grand Slam, just two triumphs away from record-holders Rafael Nadal and Roger Federer. Among the women, Naomi Osaka was the favourite against final debutant Jennifer Brady, and to no surprise won her 4th Grand Slam trophy, the second Australian Open.

The 2021 European Indoor Athletics Championship was held on March 4-7 in Torun, Poland. Only the Netherlands achieved better results than Portugal, with an extra gold medal. The Portuguese national delegation obtained second place in the final medal table, an unprecedented historical record. Only in 1996, in Stockholm, Portugal had obtained two gold medals, with Fernanda Ribeiro and Carla Sacramento. The expectations were surpassed with the victories of Patrícia Mamona, Pedro Pichardo and Auriol Dongmo. Great Britain, Belgium, France, Ukraine, Norway and Switzerland achieved two gold medals each. Due to the IAAF sanctions, Russia's absence allowed for this generous distribution of awards. The only athlete capable of winning more than one medal was the Norwegian Jakob Ingerbritsen, who won the 300 and 1500 meters competitions.

The Tampa Bay Buccaneers won the Super Bowl for the second time (after winning in 2003) in the early hours of February 8 by defeating the Kansas City Chiefs by expressive 31-9.

In the most anticipated game of the year and one of America's most important, most expensive, and hottest sporting events, Tom Brady was the hero of the night, winning his 7th title and having the status of the best NFL player in history. The Buccaneers completely dominated the match: by half-time, they were already winning by 21-6.

The first significant rugby tournament in 2021 took place between February 6 and March 20: the Guinness Six Nations Championship, Europe's top national teams' competition. England, France, Ireland, Wales, Scotland and Italy faced each other, with Wales the winner. It was the second Six Nations title for Wales in the last three editions, secured with victories over Ireland (21-16), Scotland (25-24), England (40-24) and Italy (48-7). Wales' only defeat in the competition was in Paris, against France, by 30-32.

In terms of international competitions, the Madrid Rugby 7s International Tournament also took place after a year of absence. In February, the event that took place in the Spanish capital served as preparation for the Tokyo Olympic Games. Russia and Argentina became two-time champions of the tournament after winning the finals against the Kenyan men's and women's teams. The Pumas team beat the Africans 45-7. In the women's competition, the Russians won the championship title against the Kenyans with a 21-0. Portugal, despite not having been defeated, finished the second tournament in the last position.

In Portugal, there was some good news for rugby fans: beginning April 19, youth rugby practice will be allowed, with several adaptions and measures being taken to mitigate the risk of infection. From May 3 onwards, should deconfinement plans proceed without hiccups, it will be possible to practice "total rugby, without limitations, in the training of youth teams". Competition should return shortly after. The rugby Federation welcomed the good news but will "continue to raise the competent entities' awareness about the high costs associated with the mandatory laboratory tests".

Five months after the suspension, the NBA resumed the regular season's final games and the resulting play-offs last July. NBA is considered an example to be followed by other international competitions regarding the way it dealt with the pandemic and infection prevention.

Fortunately, the vaccine against COVID-19 is already a reality for many NBA players. In early April, some clubs in the American basketball league vaccinated their players, including the Minnesota Timberwolves, the Oklahoma City Thunder, the Charlotte Hornets, and the Atlanta Hawks. The recovery path is already very concrete and present, so the NBA is expected to quickly return to its best days, after this time of stoppage and losses of millions in revenue.

The 2021 Men's World Handball Championship, the 27th edition of this event, took place in Egypt on January 10-31. It was the first handball championship featuring 32 teams instead of 24. Denmark renewed its championship title, becoming the sixth two-time world champion. At the individual level, the Danish Mikkel Hansen was distinguished as the MVP of the competition, repeating the 2013 and 2019 distinctions. Frankis Carol, the left side for Sporting Club Portugal, was the best scorer with 58 accurate shots for Portugal. As for the best seven of the competition, Sweden placed three players, followed by Denmark's two. France and Spain were also represented, with one player each. With 33 saves in 76 shots, a 43% efficiency score, Portuguese Humberto Gomes was the most effective goalkeeper in the competition. Portugal obtained its best classification ever in handball world championships.

Formula 1 2021 season started on March 28 with the Bahrain Grand Prix, the first of 23 races on the calendar. Mercedes' Lewis Hamilton won in a match against Max Verstappen, the Dutchman of Red Bull. Valtteri Bottas, also from Mercedes, was third. The Algarve International Racetrack, in Portimão, receives round three of the championship on May 2.

The 2021 MotoGP World Championship season also started on March 28 and will run until November. In Qatar, where the first race was held, Maverick Viñales (Yamaha) won 25 points, followed by Johann Zarco (Pramac) with 20 points, Francesco Bagnaia (Ducati) with 16, and Joan Mir (Suzuki) with 13, in the 4th position. On April 4, the second race took place in Doha, with the winner being Frenchman Fabio Quartararo (Yamaha), followed by compatriot Johann Zarco (Ducati), in second. Spaniard Jorge Martin (Ducati), who started from the "pole position", finished in third place. Next weekend, MotoGP riders will start racing again in Portugal, in the third round of the MotoGP World Championship, which will take place on April 18 in the Algarve. The Portuguese Miguel Oliveira returns "home" holding the 14th position in the overall tournament classification with 4 points, the result of the 13th and 15th places in the first two races.

How about you? Are you ready to go back to training and competing in your favourite sports?

As the vaccination efforts continue in Portugal, the COVID-19 pandemic is increasingly under control and the authorities' deconfinement plan is moving forward. Beginning early May, all amateur and youth sports activities, from training to competition, are once again allowed.

Let's celebrate life and sports once again! Join us for the greatest youth rugby and football tournaments in Europe: the 2021 editions of the Portugal Rugby Youth Festival and the Lisbon Football Youth Cup will be back to Lisbon's fantastic University Stadium complex this fall.

Register your team now for the 13th edition of the Portugal Rugby Youth Festival, taking place on October 23 & 24, and for the 4th edition of the Lisbon Football Youth Cup, on October 30 & 31. Come help us storm Portugal's capital with competitive and fun international rugby and football matches with teams from all around the world! 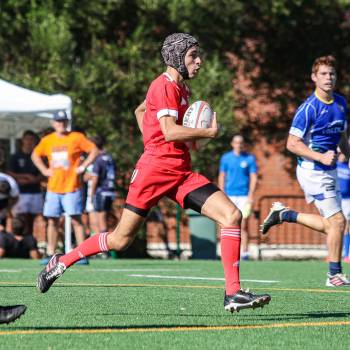