The brain, whose World Day is celebrated this July 22, is one of the most precious resources that the human organism has and that commands everything.

This day is dedicated to a different theme in terms of neurological health. This year, the World Federation of Neurology focuses on 'Brain Health for All', drawing attention to optimizing brain health and reducing neurological disorders to raise awareness of the brain's vital role.

Brain function is essential throughout our lives, not least because brain cells are fragile, die, and, as far as science knows, are mostly not replaced. The brain's structure works like a muscle that atrophies when not used and must "go back to training" to be reactivated.

Activities that benefit the brain

To maintain the health of our brain, we know that some activities may seem superfluous but help us a lot. However, there are others where we waste a good part of our time that offer very little brain stimulation and can be highly harmful if we waste too many hours on them. For example, spending too many hours watching TV or connected to screens with a passive attitude is not recommended. On the contrary, reading, learning something new, playing games like chess, crossword puzzles, crocheting, and exercising, stimulate brain health.

According to data from the World Health Organization (WHO), one in four adults does not get enough exercise, and the same is true for four teenagers. The official document states that this is estimated to cost $54 billion in direct health care and another $14 billion in lost productivity. The WHO stresses that regular physical activity is essential for preventing and controlling heart disease, type 2 diabetes, and cancer. It also helps reduce symptoms of depression and anxiety, reducing cognitive decline and improving memory and brain health.

Exercise is vital in this regard and has even been proven to create more cells in the hippocampus in the brain area that is important for memory. Among the various studies is a recent one, mentioned in a BBC program, which brought together a group of people over 60 to take table tennis lessons. Of course, it was already known, but the program demonstrated to ordinary people the powerful effect such sports learning had on their brains, and it was proven that the cerebral cortex increased in some cases.

Educating children and the general population in sports is essential for the body's health and helps the brain stay younger.

Recall some trivia about the brain:

Come and discover one of the most exciting and safest tourist destinations in Europe, ask for a quote, and find all that we can organize for you. 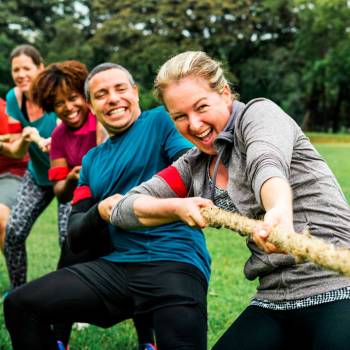 Team building: a winning bet with sports in the mix
Move Sports